Bit of a late update, but my fantasy story Not Recommended for Guests of a Philosophically Uncertain Disposition was podcast by the wonderful folks at Drabblecast. Inspiration for this story came from the finale of Buffy the Vampire Slayer, when the town of Sunnydale gets [!Spoiler Alert!] destroyed and turned into a giant crater. I often wondered what happened to it afterwards, and came to the conclusion that some enterprising soul would undoubtedly have turned it into a tourist attraction.

Take a listen to the story here.

Damita managed The Fracture’s visitor centre and gift shop, while Jem took the guided tours. There was also a cafe, which always had fresh coffee and an inventive selection of hot sandwiches, although Damita had never met anyone who worked in the kitchens.

‘They’re all very industrious, just highly introverted,’ Jem said. ‘You should go and get one of today’s specials — Cajun pheasant and fried pickles on a toasted sesame seed bagel. Marvellous.’

A stock delivery had arrived in the night, and she was working her way through the boxes. They contained fridge magnets, earplugs, bandages with pictures of cacti on them, and snowglobes. Damita picked one up and shook it. Black glitter fell on a scale model of the visitor centre, and lightning flashed.

‘Food is important,’ Jem said. ‘Blood sugar should be kept within optimum parameters to ensure emotional stability. It says so in the Employee Handbook.’

Listen to the full story at Drabblecast
Posted by Michelle Ann King at 12:23 PM No comments:

Out now: Vol 1, Issue 1 of The Macabre Museum - The debut issue of indie horror lit's newest journal! From the genre's freshest (and most disturbed) minds come 10 dark tales, 12 twisted poems, and 3 pieces of demented art... including my paranormal crime story Getting Shot in the Face Still Stings.

I always think there’s great fun to be had with characters who think they’re the Big Bad, only to run into someone worse. This story is a kind of horror take on Groundhog Day, without the possibility of the escape-through-self-improvement ending. It’s no wonder she’s gone homicidally insane, but at least she kept her sense of humour. I think you have to admire that.

Dom doesn’t lose his temper as easily as his brother, so normally he’s the one who deals with it when shit goes pear-shaped. But shit has been going pear-shaped a lot lately, and by the time Dom gets to the warehouse Marc is already in full swing. Literally—he’s gone after poor Jimmy with a nine iron.

Dom picks his way across the warehouse floor, cursing under his breath. His shoes are new, and it’s a fuck of a thing to get blood out of tan leather. He puts both hands up, palms out. ‘Marc. Take it easy.’

On the floor, Jimmy groans. He’s pulled into a foetal position so Dom can’t tell the full extent of the damage, but his clothes are soaked in just about every bodily fluid there is. At first guess, Dom would say the kid’s lost his teeth, his fingernails, his bollocks and at least a couple of internal organs.

Read the full story in Issue 1 of The Macabre Museum !
Posted by Michelle Ann King at 3:21 PM No comments:

For Your Safety and Comfort, Please Keep Arms, Legs and Tentacles Inside the Car At All Times (Fantasy, 3,210 words) was published in audio at The Overcast, Aug 19

Getting Shot in the Face Still Stings (Horror/Crime, 3,775 words) will be reprinted in issue 1 of The Macabre Museum, 2019

Possibly Nefarious Purposes will be reprinted at Strange Constellations, 2019/2020

Posted by Michelle Ann King at 11:30 AM No comments:

New podcast - 'For Your Safety and Comfort, Please Keep Arms, Legs and Tentacles Inside the Car At All Times' at The Overcast

The podcast of my fantasy story 'For Your Safety and Comfort, Please Keep Arms, Legs and Tentacles Inside the Car At All Times' is now live at The Overcast!

One of my favourite stories, and definitely one of my favourite titles, this was written for Penumbra Magazine’s ‘Utopia’ issue, and reflects my belief that you don’t have to scratch a utopia very deeply to find a dystopia underneath.


For Your Safety and Comfort, Please Keep Arms, Legs and Tentacles Inside the Car At All Times - Fantasy - 3,210 words

Lia waved a hand. ‘Hon, I’m sorry, but you’ve just got to hear this.’ She grinned and leaned back in her seat. ‘I found God.’

Katie stared at her. ‘I’m sorry, you did what?’

‘I found God. And I don’t mean I became a born-again Christian or anything, I mean I literally discovered the omnipotent creator of the universe. While I was doing that house clearance in Balham.’


Listen to the story at The Overcast now!
Posted by Michelle Ann King at 2:24 PM No comments:

New Reprint: Garden of Fog and Monsters in First Contact

I have a reprint in First Contact: A Science Fiction Anthology from Indie Authors Press, out now in ebook and paperback.

Garden of Fog and Monsters: They pitch it to the volunteers as a contest that can be won, but there’s no such thing as a free paradise.

They created a whole new branch of physics to make sense of it, but everybody was way more interested in the practical applications than the theorems. Rolling green hills and crystal blue lakes? You got it. A skyscraper fifteen miles high? You got it. Furry purple dinosaurs? You got it. In this garden, everybody’s God.

Read the rest of the story in First Contact
Posted by Michelle Ann King at 2:02 PM No comments:

Listen to the story here.
Posted by Michelle Ann King at 11:34 AM No comments:

Wolf, or Faith in the Future (SF, 621 words) was podcasted at Manawaker Studio

In the Fog, There's Nothing but Grey (Horror, 1,437 words) was published in Black Static Issue 67

God State (SF, 1,299 words) was reprinted in Sins and Other Worlds edited by Eric S Fomley

Not Recommended for Guests of a Philosophically Uncertain Disposition (Fantasy, 2,600 words) will be podcasted at Drabblecast, 2019

Reprint - God State in Sins and Other Worlds 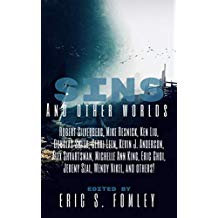 Sins and Other Worlds is a dark Science Fiction short story anthology comprised of reprint stories from 30 talented authors. The stories range from deep space, alien planets, alternate realities and beyond. Most stories within are flash fiction interspersed with several longer works from both emerging authors and titans in the field. The anthology collects some of the best dark sci-fi in recent memory.

When you get to a certain age, conversations with your mates often turn into a nostalgia-fest about The Good Old Days. Is the past better than the present? Maybe. Maybe not.

Read the rest in Sins and Other Worlds, available in ebook now.
Posted by Michelle Ann King at 4:30 PM No comments:

New story in Black Static -- In the Fog, There's Nothing but Grey

I have a new story in Issue 67 of the always-marvellous Black Static!

In the Fog, There's Nothing but Grey is a pending-apocalypse story taking place during an epidemic of amnesia, and is about finding out who you are by watching what you do...

Nobody’s gone in or out of the pub for a long time, so it makes us all jump when the door opens. I hadn’t even realised it was unlocked.

‘Here comes trouble,’ Gil says. He says that about everything, from Chrissie coming back from the Ladies to pigeons landing on the roof, but this time I think he could be right — there’s something about this newcomer that sets my spidey-sense humming. I can’t put my finger on what, but sometimes that’s how it is: the eyes send a message straight to the hairs on the back of the neck, bypassing the brain completely. Which maybe isn’t such a bad thing, considering the brain’s not the be-all and end-all it used to be.

Read the rest of the story in Black Static 67, available now from TTA Press.

Posted by Michelle Ann King at 4:37 PM No comments: