Reprint: Light Winds with a Chance of Velociraptors at Daikajuzine 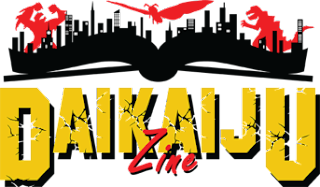 Light Winds with a Chance of Velociraptors (Fantasy) has been reprinted at the wonderful Daikaijuzine, issue 5.
I love end-of-the-world stories, but so often the characters who fix it are soldiers, scientists, or superheroes. I thought it would be fun to let someone else have a go at saving the world...
‘That’s the worst thing about the end of the world,’ Elsie said, staring mournfully into a teacup that had long ago been licked clean of every last drop of Tetleys and soggy crumbs of custard cream. ‘Routines go straight out the window.’
Harry glanced away from the TV, which was showing aerial footage of a tiger chasing pigeons in Trafalgar Square. ‘Really? That’s the worst part? It’s not the deaths of millions and the imminent fall of civilisation, it’s that nobody’s been round with the tea trolley for a couple of hours?’
Read the rest here
Posted by Michelle Ann King at 2:33 PM